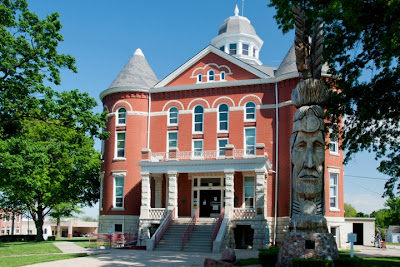 Nestled among the glaciated hills of the far northeastern corner of the state of Kansas, and right off of Highway K-7, is the small community of Troy, one of the oldest towns in the state, and home to several interesting sites. I have visited Troy on a couple of occasions, but Wednesday of this week was the since I began my Kansas Journeys blog in 2009. 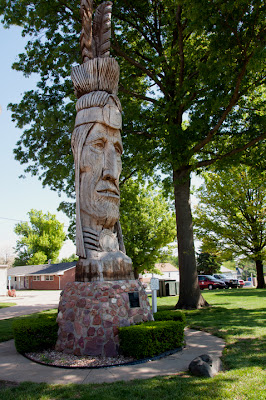 Troy is best-known as the setting for one of Peter Toth's Indian carvings. Toth is a Hungarian-born resident of Florida whose "Trail of the Whispering Giants" includes 74 wood carvings honoring native Americans indigenous to the area in which the sculptures are placed.  The artist did not charge Troy to create the Whispering Giant, only to provide the materials, lodging and expenses. 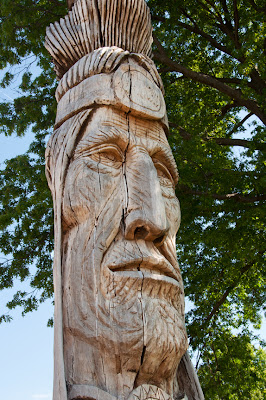 The Troy monument represents a composite of the features and clothing customs of the Kickapoo, Pottawatomie, Iowa, Sac and Fox tribes, all of which have reservations in the area. Toth came to Doniphan County in 1978 to sculpt this work, the twenty-ninth completed. The burr oak log chosen (from a 100 foot tall tree) was 67 inches in diameter. When the sculpture was completed it was 27 feet in height.

Peter Toth's "rough" style is ideal to enable him to demonstrate the conditions in which the Indians lived. He noted that, like his Hungarian ancestors, they had been "driven from their land, ... abused and rejected, ... and suffered from humiliation and trickery" 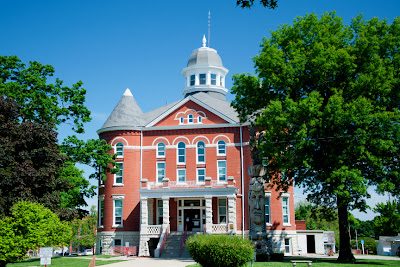 The Indian Chief occupies a spot in front of the Doniphan County Courthouse, one of the numerous simple, but stately, courthouses designed by Kansan George P. Washburn. The Neo-Romanesque structure was added to the National Register of Historic Places in 1974. 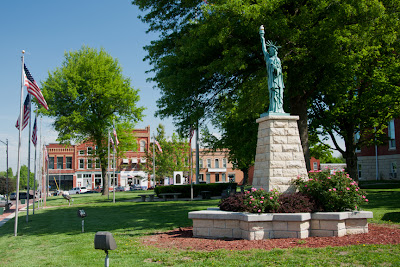 The businesses and homes surrounding the courthouse square make up the Doniphan County Courthouse Square Historic District, which was added to the National Register of Historic Places in 2002. 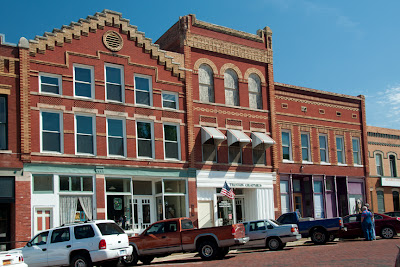 Most of the buildings on the square are of Queen Anne or Italianate design. Fortunately the owners have not attempted to "contemporize" them by adding the abhorrent faux  modern facades so popular in the 1960s and 70s. Over the years, these buildings have served a number of purposes and survived a fire. Among the more intriguing uses? A second floor skating rink. (I'm wondering about the racket downstairs.) After a fire damaged the skating rink, it was rebuilt as the Leland Opera House in 1900. 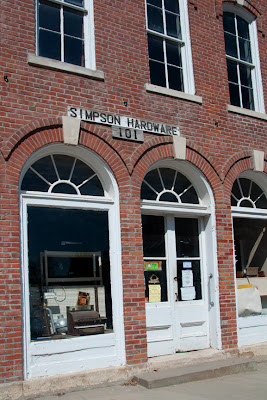 It appeared that Simpson Hardware might have been in business in the not-too-distant past, but I didn't see anybody to ask. 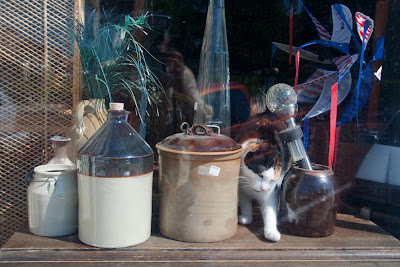 At first glance, I thought this cat was of the stuffed variety, part of an antique store's inventory. Wrong, guess it was there to control the mouse population. 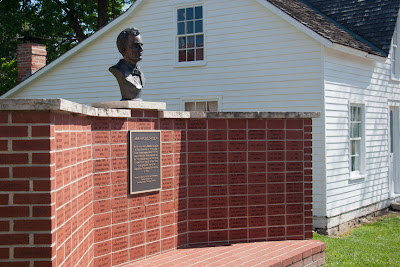 The Lincoln Connection: Abraham Lincoln made one brief visit to Kansas Territory, that to make campaign speeches in 1859. 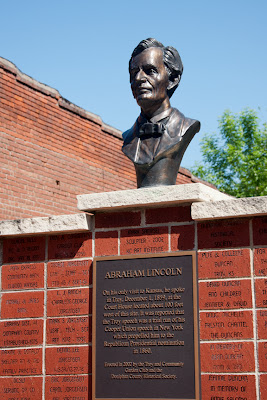 Depending upon  which source you choose to believe, he gave a speech either on the courthouse steps or on the steps of a hotel (shown below in an earlier time, and as it is today). It has been reported that Lincoln used the occasion to fine-tune a speech he was preparing for an important occasion "back east." This writer is not an authority on Lincoln, but has family connections to him and has read much about him. It would be my opinion that he probably spoke from both places, and maybe even after emerging from an outhouse during his visit. Folks were drawn to him, and loved to hear his home-spun homilies and good-sense ideas. 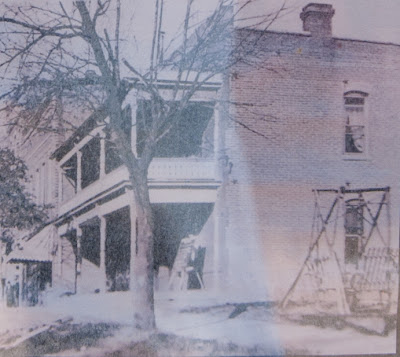 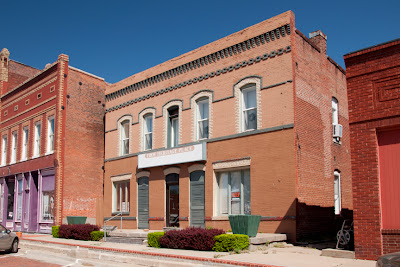 I, for one, wish the balcony and woodwork were still present. 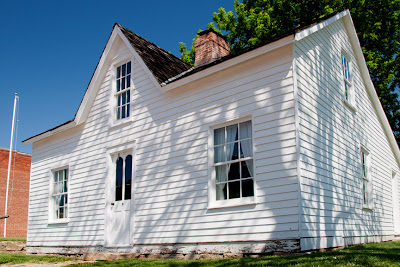 On a previous visit to Troy, I happened upon this house in the process of much-needed restoration and stopped to visit with the hometown folks, members of the Doniphan County Historical Society, who were making it happen. It is the oldest house in the county, built in 1856 of hand-hewn cottonwood and walnut by Nelson Rogers, Troy's first blacksmith and first postmaster. He sold the property to Sidney Tennant. Tennant, an attorney, had ties to Abraham Lincoln, and most likely entertained him here during his 1859 visit. The house sits across the street from the courthouse, and is included in the Doniphan County Courthouse Square Historic District.

Visiting Troy ~ Troy is easily accessed from US Highway 36, or from Kansas Highway 7 on the Glacial Hills Scenic Byway.  You might add Troy to your itinerary if you are visiting Atchison, St. Joseph (MO), Highland, or Hiawatha ... Eating: The Kansas Guidebook for Explorers recommends Home Place Restaurant, open Mon-Fri for breakfast or lunch, Sunday for lunch. Specialties are reported to be Hungarian pork chops, sour cream dill chicken breast, and homemade bread and square pies.

Trivia Question ~ For what pro-slavery Missourian was Doniphan County named? The answer can be found at: http://skyways.lib.ks.us/counties/DP/

Nothing Flat About the Arikaree Breaks 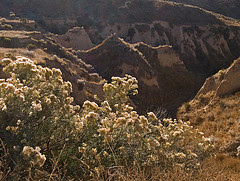 I'm pleased to report that I was recently honored by a request from Kansas Travel and Tourism to share my recollections of a visit to Cheyenne County's Arikaree Breaks on the state's travel blog. I encourage you to check that piece out at:

http://blog.travelks.com/arikaree-breaks-nothing-flat-about-that/
Posted by Unknown at 11:21 AM 13 comments:


While doing some organizational work on my photo archives, I discovered a few photos that I had intended to post last spring. En route home from a photo "safari" to the Red Hills, we (Melody dog and I) had stopped briefly at Pawnee Rock, a little-known, but historically significant, landmark on the plains.In spite of its significance, I never got around to posting my photos. 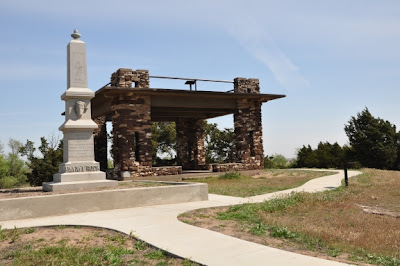 Although Pawnee Rock State Historic Site is not exactly what you might call a "Wow!" place visually, it is a place of importance to those interested in the Santa Fe Trail in particular, or Plains Indians and Kansas history in general. Driving US 56 between Great Bend and Larned can see the mound from the highway, and it doesn't take a lengthy detour to drive over and check it out. 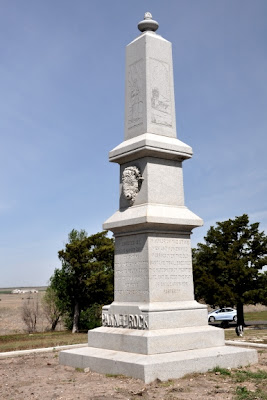 Prior to the arrival of European explorers and settlers, plains Indians used the mound, then about 150 feet taller than the surrounding flat-lands*, as an observation point from which to spot the vast herds of American bison which roamed the area, as well as warring rival tribes. Later on, it was also used to spy the wagon trains on the Santa Fe Trail which were crossing their hunting grounds.  Trail [travelers] were undoubtedly glad to reach Pawnee Rock as it meant they were half-way to Santa Fe, but they also knew that Indians could pose a danger at this point. In 1859, nearby Fort Larned (originally known as the "Camp on Pawnee Fork") was established making this stretch of the roadway a little more secure for travelers. 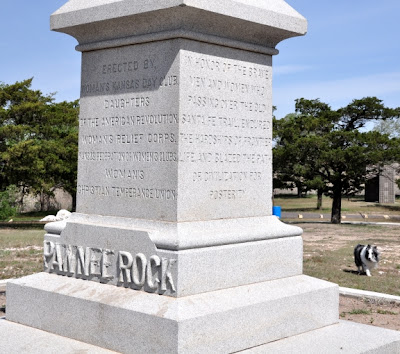 How did Pawnee Rock get its name? It depends upon whom you ask. Kansaspedia, a website of the Kansas Historical Society, outlines three versions of the story:

"Many stories have been told to explain how Pawnee Rock got its name. One tale relates that it was sacred ground for the Pawnee Indians who held tribal councils on its flat top. Another describes a great battle in which a small band of Pawnees was destroyed by a force of Kiowas, Cheyennes, and Arapahos. Both of these attribute the name to events in Pawnee lore that occurred near the Rock. A tradition among white plainsmen was that the Rock received its name in 1826 from an embarrassing mistake by Kit Carson. A raw youth of seventeen, Carson was on his first trip into the West. The wagon train with which he was working camped for the night near the Rock. He was given guard duty. In the dark, he shot his own mule, thinking it was an attacking Pawnee. His unkind associates commemorated his unfortunate experience with the name, Pawnee Rock."

Pawnee Rock State Historical Site is now administered by the Kansas Historical Society. The stone monument was dedicated in 1912. Pawnee Rock was added to the National Register of Historic Places around 1970. 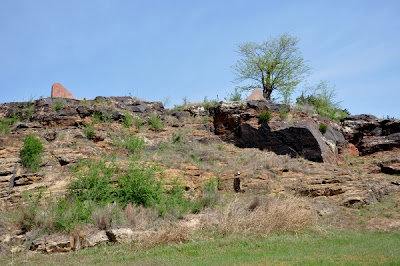 * Modern visitors can easily observe that the "summit" of Pawnee Rock is somewhat lower than 150 feet. During the 1870s, the engineers building the nearby railway running parallel to the old Santa Fe Trail removed much of the rock for the purpose of fortifying the road bed. Some early settlers also made use of the stone as building material, and as a result, Pawnee Rock is now about half its original height. 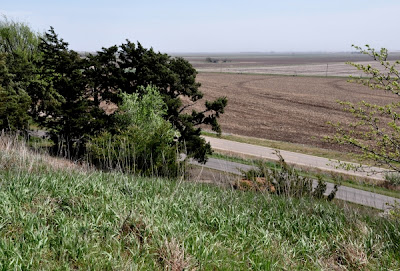 Looking out from the monument across the croplands, use your imagination. Visualize a vast ocean of grass, enormous herds of American bison, or a line of oxen carts slogging along the Santa Fe Trail. That was the scene here - not that many generations ago.

Learn more about Pawnee Rock at these sites:


I especially recommend this page at Legends of Kansas for its detailed history of the region and the town of Pawnee Rock: http://www.legendsofkansas.com/pawneerock.htmli


This web page has a number of additional photos of Pawnee Rock, as well as interesting reading about the Smoky Hill and Santa Fe Trails. Scroll down to see Pawnee Rock photos:
http://www.historum.com/american-history/19145-howard-raynesford-smoky-hill-trail-2.html
Kansas State Historical Society:
http://www.kshs.org/

Other Kansas Travel Blogs and Sites